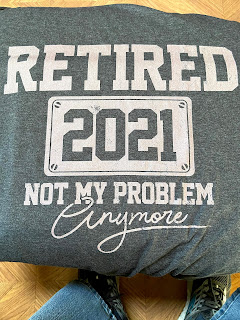 Can't believe the month of April is almost over with and it's time to post again!!  A lot has happened since the end of last month, but first:

It's WIPocalypse time, when we all show off what we've done in the past month to complete our WIPs and not leave them for our relatives to deal with, or for the end of the world as we know it.

WIPocalypse  Go and see what others are doing!!

Question of the Month - Have you found yourself to be more or less productive in your stitching during the Covid-19 pandemic?

To be honest, I've been less productive because while I was working, our busy season was extended beyond, beyond and it seemed like I was working all the time!!  So while I got a few things done, not as much as Ii would have liked.

Then I decided that I had enough and quit my job and now I'm deciding if it's a forever quit, or if I really need to get another job.

I've been enjoying the time off and must admit I'm thinking a forever would be good. My kids got me this T-shirt when I told them I had quit, so I know what they would live to see. Hubby thinks I need to get a new job as I'm interfering with his retirement. 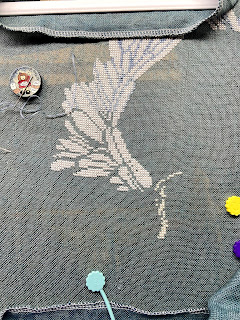 So what have I done this month?

I pulled out L&L's Peace Angel and worked my way down to the bodice of the angel's dress. Was hoping for some of the darker yellow, but so far it's more white and light yellow. Once I can get enough of the bodice in that I can do her face, which is over one, but I'm debating if I will do over one, as the linen has lot of uneven threads. Have a lot to fill in on the wing and there is a lot more wing to do!!

I need to get this one done before I get the current angel done, as this one is for Arwen who turned 7!! The first 3 were done before they got 4, so I need to correct that and get it done. I really do love the angel and have wanted to stitch it since it came out, but I'm not enjoying it as much as I thought I would, but that is probably become I started at the top and not in the middle.

So spinning my decision wheel, Peace Angel came up for the May focus, so maybe we'll see an angel's face for May's check in - keep your fingers crossed.   I have decided that I do need to spend at least one day a month on this or at least 8 hours. If I do that, I could have it done within a year or less.

My second spin for my smaller project or one that I'm not in a hurry to finish will be my Lucky 13, I have 1/2 of this design done, so hoping to get maybe one or two more motifs done. Each one stitches up fast, and I do have fun stitching them, I think next up is a spider? Will need to pull it out when I get home again. 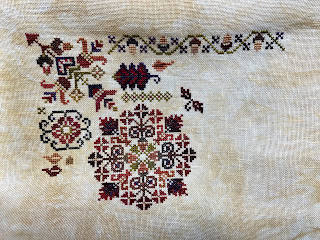 My April spin was to focus on Autumn Quaker and I'm happy with what I got done ;) This was more fun as I got to areas that had more of the same color, so I could stitch more and change threads less. But never the less it was a lot of thread changes. I love the colors and will work on this one more I'm sure in May and I would love to get the 1st page finished.

I will say I'm not happy with the quality of the called for threads and would not purchase the threads again. Since I started this with them, I will continue and get it done with them. I also have Winter Quaker with the same brand of threads, hoping those are better quality and the problems I'm having are due to the dark colors of the dye. I do love the rich colors.

After doing a lot of color changes I decided I needed something that would be solid colors, so I pulled out my PeliCan which is on 40 ct. I would have liked to have gotten the first page done, so this one will stay out to play with in May too. I'm not far from getting it done and it's enjoyable to stitch on. The top line shows the width and the you can see the length of it on the left. there is a lot of open space, so there really isn't all that much left to stitch. 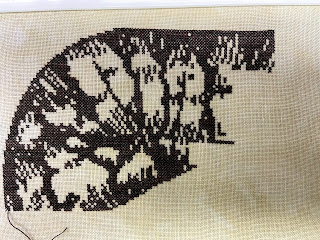 Since I knew I would be going back down to KY for a few weeks, decided it was time to have my new granddaughter's flannel rag quilt done. So pulled out the squares and sewed them together.

After I was done, and had "ragged" it up, I discovered I had sewn on several rows incorrectly. Oh well, not going to worry about it now, it is still soft and warm and will be used. I'm sure there will be another one in Peola's future, so the next one will be sewn better. 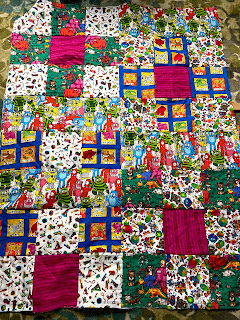 Last thing I worked on was Coming To American which is my Mayflower design and my small focus for April. I started it on 28ct. over one, but decided I just didn't like it, so I found a piece of 36 ct. in my stash that would work. I'm not sure how the birds will look, but, I like the rest of it, and will continue to work on it, but probably not in May.

Part of the month was spent frogging out what I had done on the 28 ct. so I can put that piece of linen back in my stash for another project.

I'm hoping that with the waves in it will give me some additional reference points that I can do other things like the ship, the wordings under the waves or the pilgrim that seems to be hanging off the side of the ship Some have theorized he represents the person(s?) who died while they sailed across the ocean to America.  He is small and should stitch up fast.

I'm hoping to get a little more done on it this week, but I'll also be watching the new grand baby, so not sure if I'll get any stitching done at all. 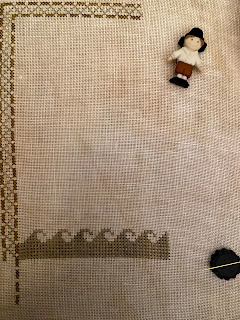 And the last thing I worked on in April was my needlepoint Pig Angel, or when Pig's fly?  Can't remember what the name of it was, but I'm enjoying it.  I just have the clouds to finish and not sure I'm happy with what I'm trying with the sequins.  I'm going to try a few other things maybe spreading them out a little bit more, or adding beads.  I love the back ground stitch, it was perfect for it, you can tell it's there, but it doesn't overwhelm the design.

Unfortunately this isn't the most recent picture as I have the background completely done now.  I'm going to finish this into a small pillow for my sister.  I hope to work on it more this week.  I think in one or two evenings I could have it done. 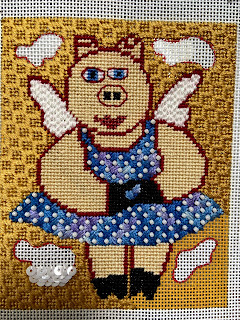 Hope everyone had a great month and I look forward to doing more stitching in May and maybe even some more sewing.  also need to talk to a person about a possible job.  One thing the shut in has done for me in the past year was increase my vacation time, so my payout was nice and gives me more time to decided what I want to do.